The Obamas are celebrating Thanksgiving like so many others will this week: with a family photo.

On Wednesday, former First Lady Michelle Obama shared a group shot of her and husband Barack Obama with their two daughters, Malia and Sasha, just in time for Thanksgiving, the family’s third since their time in the White House.

“From our family to yours, #HappyThanksgiving!” Mrs. Obama wrote on Twitter.

The photo — a rare one of them all together, amid their diverging lives and retreat from the political spotlight — was taken in May before Sasha, then a high school senior and weeks away from turning 18, left for her prom.

The Obamas have stayed busy since President Obama left office, especially in the last year.

Mrs. Obama released her memoir, Becoming, in late 2018 to smash sales of more than 10 million copies and counting. She’s since spent much of the year on a book tour that recently resulted in a Grammy nomination for best spoken word album, an award her husband won in 2006 and 2008 for his own audiobooks.

The former first lady also announced the release of a new journal, Becoming: A Guided Journal for Discovering Your Voice, which features an intro from her and 150 questions and quotes to inspire readers to write down their own journey.

President Obama has been writing himself, with his new memoir possibly hitting shelves sometime before the 2020 election. He wrote a first draft on legal pads, just as he did for his first book, Dreams from My Father.

Neither Obama has endorsed a candidate — or even hinted at a preference — ahead of next year’s 2020 Democratic primary. The nominee will run against President Donald Trump.

Meanwhile Mrs. Obama is gearing up for a trip to Vietnam in December alongside Today host Jenna Bush Hager, daughter of former President George W. Bush. They will travel with the Obama Foundation’s Girls Opportunity Alliance. On the trip, Mrs. Obama will meet young girls and share their stories in partnership with Today and YouTube Originals in an effort to help inspire girls around the world with stories of empowerment.

“The future of our world is only as bright as our girls,” Mrs. Obama said on Today in October.

She and her husband have been amid major life change since 2017. Malia, 21, and Sasha are now both off to college, which Mrs. Obama noted in a post celebrating her wedding anniversary last month.

“27 years ago, this guy promised me a life full of adventure. I’d say he’s delivered,” Mrs. Obama wrote on Twitter. “Here’s to our next chapter of becoming empty nesters and discovering what’s next—while still feeling the magic that brought us together all those years ago.” 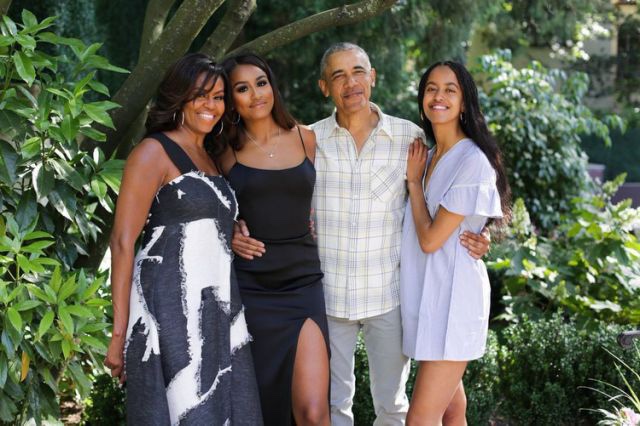